Prolactin is the final resting place of the orgasm life cycle…literally. It is a hormone, not a neurotransmitter. So it travels through the blood to do its work rather than ignite like a neurotransmitter in the brain.

Hormones can be triggered and enter the bloodstream to do their work in an instant. They are powerful and almighty. Prolactin specifically is what puts men to sleep in the wake of sex. A natural tranquilizer gun.

“Arousal” is stimulated by anything the brain senses will be rewarding. A reward can even be defined as something the brain has memory of that induced prolactin even beyond the excitement and pleasure of phasic dopamine spikes. The brain essentially remembers that it once ate something, drank something, or achieved orgasm with in the past.

Upon an orgasm, prolactin surges through the body. It literally IS the satisfaction.

Everything before prolactin has surged is one thing…and everything after that is another.

The surge of prolactin upon orgasm is so powerful that scientist believe that if you could detect one’s prolactin level in real-time, it could be a reliable indicator whether someone had an orgasm or not.

Edging without orgasm – men who edge (stimulated right up until they are about to orgasm but stopping just before) or are edged without orgasm remain in the arousal state and do not obtain satisfaction. They are clearly frustrated afterwards because their bodies never had a chance to secrete prolactin!

Ruined orgasms – while we will cover edging & ruined orgasms in greater detail later, for now lets just say that ruined orgasms or ejaculation without the orgasm, are essentially what happens by stopping friction right before the body is about to release prolactin!

Behavior after orgasm – sleeping, what is perceived as laziness, distracted attention, less obedient, less attentive – these are all due mostly to the surge of prolactin if one achieves a full orgasm.

Time to reset – this is called the refractory period. Most men will need at least an hour up to even days, depending on their age, to be ready to get fully erect again for another orgasm. The older the male the longer it takes. This time period is due to the time period of flushing out the prolactin surge.

Post Orgasm Sensitivity – Once prolactin has surged, being touched is no longer pleasurable. The male is incredibly sensitive to further stimulation after an orgasm, a state often exploited by Dominants called post orgasm torture. Lots of fun for the sadomasochists out there. I’d suggest making sure your subject is tied up tight if you really want to dig in. It can be brutal.

Extensive research has been done on the behavior of prolactin in males…typical. In many of the research studies I reviewed, there were many calls to study prolactin in Females and hopefully that happens more and more now. However, there is a VERY interesting twist to what researchers do know about the prolactin effect in Woman in contrast to males that Female Supremacists will love:

Prolactin does surge in Women upon orgasm. The difference is that it does not cause a refractory period in all Women. This means that for many Women, the door is completely open to become multi-orgasmic. According to some research, the limiting factor is clitoral sensitivity post orgasm, it can become uncomfortable, even painful, similar to what males experience during post orgasm stimulation I suppose. But for many it creates an opportunity to maintain arousal through many continued orgasms, each one becoming even more exciting than the last. Pleasure and satisfaction actually increase proportionally to greater and greater releases of prolactin. Her second orgasm releases more prolactin than the first and so on.

Masters and Johnson explored the Female orgasmic experience in a very interesting way. They asked Women to draw their orgasmic experience as a curve indicating the sexual tension they felt over time while indicating starts and stops and more importantly where orgasms were experienced. These graphs are summary of the different types of drawings they received: 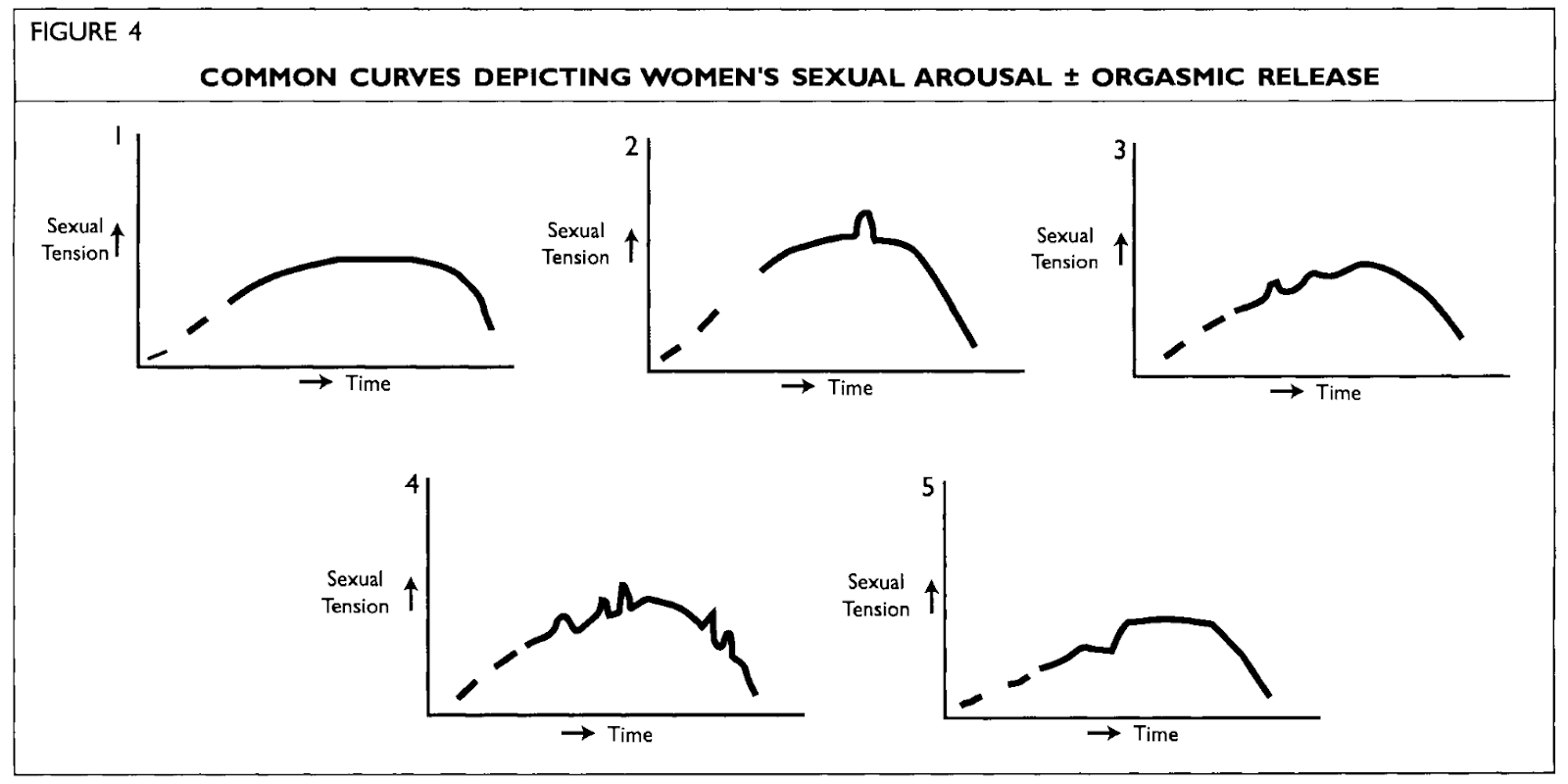 Masters and Johnson noted that the first diagram, depicting the experience of many Women, a sustained period of sexual tension or peak arousal without an indication of a release. Perhaps this represents dopamine induced pleasure and prolactin surges where satisfaction is achieved but the high drama of orgasm has not. All of these Women stated that they were satisfied and felt a sense of well being afterwards. So men, there is your answer, some Women do not need to orgasm in order to feel satisfied. I am guessing we have a surge of prolactin to thank!

Other Women, often ones who have said they had years of experience and practice achieving orgasm, utilized various techniques including conscious breathing, pelvic thrusting, and focusing their minds to achieve multiple orgasms.

This state that Women achieve of sustained arousal with multiple orgasms Masters and Johnson coined the term: Orgasmus. I suggest the submissive male ask himself at all times:

“How can I support her in achieving her own preferred version of Orgasmus?”

“How do I remain focused on her achieving this state?”

And, I hope, the Dominant Female will ask herself:

“How do I use my subject to get myself to where I want to be?”

Oh there are so many ways. But I hope at least one is starting to become obvious. 🙂